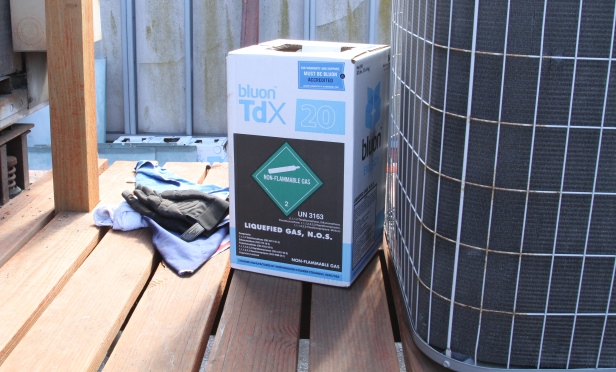 Life is full of choices and that is especially true when we consider the adventure of homeownership. We need to consider our options as far as everything is concerned. It doesn’t matter if you’re trying to choose drapes for your living room, the color of the new sofa or even whether or not to replace your HVAC unit, there are always going to be options. Of course, not all options stack up equally and sometimes, you may find that you have choices that can have an impact on you, your family and even the environment.

One of the options that you may be up against is repairing the HVAC unit at your home. If you are still operating with an older unit, you probably are using the refrigerant that is known as R-22. This is the refrigerant that has been used for many years, but it was determined a couple of decades ago that it actually wasn’t very good for the environment. In fact, it is partially responsible for the hole in the ozone layer, and experts fear that continuing to use this refrigerant will only add to the problem.

The developing countries of the world got together and decided that they would phase out the use of Freon within a couple of decades. The entire process began back in 2010 but by 2015, 75% of the Freon in use was going to be discontinued. This isn’t true worldwide but only in the United States and other countries that agreed to it. We are now growing ever closer to 2020, which is when the refrigerant will be limited to an extreme extent. By the time 2030 rolls around, it will be illegal to use Freon in any way, shape or form.

The problem is, many of us are still dealing with the older AC units at our home and they may still need to be filled with Freon. That is why many of us are looking for a way to phase out the use of R-22, even before it is mandatory to do so. It might surprise you to learn that there are actually a number of replacements on the market that can do a really good job when it comes to keeping your home cool and keeping your HVAC unit up and running properly.

In this article, we are going to discuss 4 different alternatives to using Freon gas. These can work very well and as long as you have the exchange made properly by a certified technician, you can be happy with the fact that you are doing something nice for your family and something nice for the earth.

R-134A – This is probably one of the more common refrigerants that is used instead of R-22. Unlike R-22 or R-12, it is an alternative that does not use a blended compound. As a result of it being a single component inside of the refrigerant gas, it is not necessary to use a number of different recovery machines when work is being done on the unit.

R-134A is approved by the Environmental Protection Agency as an alternative option for R-12 AC systems in cars and trucks. That is where much of the R-12 is still in use. There may be some safety hazards that are involved in making the switch, however, so it is necessary to have the system retrofit properly. Fortunately, it is not difficult to do and a professional can make the switch for you.

R-404A – This is an alternative that can often be used to replace R-22. It is used in a number of different types of refrigeration systems that cool the air within down to 15°C. This is a substantially low temperature, so it is often used for commercial purposes, especially in the transport industry. Since it has a depletion potential of zero as far as ozone is concerned, it can really help to save the environment while at the same time, providing an option that can sometimes surpass R-22.

R-407C – This is a refrigerant that is very similar to R-22 and it is often used for those who want to make the switch from using Freon altogether. It can be used in ductless split systems as well as packaged air-conditioners and water chillers. It is commonly found in residential systems as well as in both industrial and commercial units. It can even be utilized in refrigeration systems as well. Since it also has zero impact on the ozone, it is considered a viable alternative to R-22.

R-410A – There are two different hydrofluorocarbons found in this refrigerant blend, pentafluoroethane and difluoromethane. It does not have an impact on the ozone layer, so it can be used in place of R-407C and R-22 systems. It is also not chlorine-based and it may produce a more energy-efficient option compared to R-22 systems.

One of the reasons why many people choose the R-410A over the R-22 is because it is very easy to retrofit the system. There is also more pressure when using the R-410A refrigerant, so it can perform better as well. In most cases, you will find it in commercial refrigeration systems, chilling units and air-conditioners. It is also something that is sometimes used in commercial units, but it is under a lot of pressure. Any type of replacement of R-22 needs to be done by a qualified technician.

As you can tell, there are some good alternatives such as top tdx 20 in 2018 when it comes to switching out the Freon-based system. This is not only true for residential units, there are also many options available for industrial and other commercial units as well. Since R-22 is being phased out altogether by 2030, it’s a good idea to consider the way you are going to make the switch now. Will you simply switch what is in your existing unit or is it time to make a change and swap out the compressor? It’s an option that you should consider because it can have an impact on the environment and on your comfort at home.